And in fact, because of this technology, we are able to use mobile payment services like Google Pay, Samsung Pay, and Apple Pay.

So, let’s understand in this article, what is NFC, how this NFC works, what are the different applications of NFC, and what are the advantages of NFC over technologies like Bluetooth, RFID, and QR code.

What is NFC Technology?

So, this NFC stands for Near Field Communication. And as its name suggests, it is short-distance wireless communication technology.

So. when two NFC-enabled devices are very close to each other, roughly around 4 cm, then they can communicate with each other using the radio waves.

Now, out of the two communicating devices, at least one device has to be an active device like smartphones, tablets, or payment terminals.

While other devices can be active or passive. An example of a passive device is the NFC Tag.

While the passive device does not require any external power supply and is powered by the electromagnetic field of the active device.

So, after having a little background about NFC, now, let’s understand how NFC Works and how NFC-enabled devices can communicate with each other.

So, as I said earlier, these NFC enabled devices to communicate with each other using radio waves.

While in the case of the NFC tag, if you tear down the tag then, you will find the antenna pattern like this. So, using these antennas, these devices are able to communicate with each other.

Modes of Communication in NFC:

This NFC supports the three modes of communication.

An example of this mode is when we are sharing the information using the two smartphones.

Now, in this mode, both devices are active devices. And they can communicate with each other by generating the radio waves alternatively.

It means that when one device transmits the data at that time the second device only listens to it. And it does not generate its own radio waves.

Similarly, when the second device transmits the data, at that time the first device only listens to it. And it does not generate its own radio waves.

So, in this mode, both devices generate the radio wave alternatively at the carrier frequency of 13.56 MHz. And using this they can share information and files with each other.

So, this is all about the Peer-to-Peer communication mode.

Now, let’s talk about the second mode, that is reader or writer mode.

An example of this mode is when we are accessing the data or information using the smartphone from the NFC tag.

So, this mode of operation is very similar to the RFID. So, in this mode, the active device like smartphone or tablet reads or writes the data on NFC tag using the principle of Electromagnetic Induction.

Now, to read the information from the NFC tag, the active device generates the radio wave at the carrier frequency of 13.56 MHz.

So, these waves used to get coupled to the antenna of the passive tag and from these electromagnetic waves, the NFC tag receives the power.

So, this time-varying electromagnetic field generates the EMF or voltage in this passive tag.

So, this generated voltage is rectified using the rectifier and it is used to power up the chip inside this NFC tag.

So, once the chip is powered up then the tag responds back to the active device by the technique which is known as load modulation.

So, in this technique, the tag uses the internal clock of the chip and it generates the auxiliary carrier frequency of 848 kHz.

Now, depending upon the stored data inside this chip, the load which is connected in parallel to the antenna is turned ON and OFF.

And in this way, the data is sent back to the active device.

So, in this way, by the principle of electromagnetic induction, the passive tag receives the power, and using the load modulation the data is sent back to the active device.

So, this all about the reader and the writer mode.

Now, let’s talk about the third mode, which is known as the card emulation mode. So, an example of this mode is when smartphones are used for mobile payments.

So, in this mode, both devices used to be active devices.

Generally, the one device used to be a smartphone, and the second device obviously used to be a payment terminal. But in this mode, the smartphone acts as a passive smart card.

So, they do not generate their own radio waves but they only respond back to the requested data by the payment terminal.

So, in a way, the smartphone acts as a passive device. So, the operating principle of this mode is very similar to the reader or writer mode.

So, these are the three supported modes of communication by the NFC. Now, in this NFC, some standards are defined to establish the communication between the two devices.

And in these standards, certain parameters are defined like, what should be the operating frequency or the carrier frequency of the radio waves, what type of coding scheme should be used.

What modulation technique should be used, and what should be the data rate for the information sharing.

So, these standards are derived from the already existing standards which are used for radio communication.

So, here is the table, which summarizes some of the parameters which are defined under these standards.

So, that is being said, now let’s see some useful applications of the NFC.

But apart from that, it can be used for home automation, for health care, in the library system, or even for personal usage.

So, at home, just by tapping the NFC tag using smartphones we can change the brightness of the ambient light Or, it is also possible to change the temperature of the AC. Or even we can automatically close the doors using this NFC.

So, these are some of the applications in which the NFC can be used at our home. 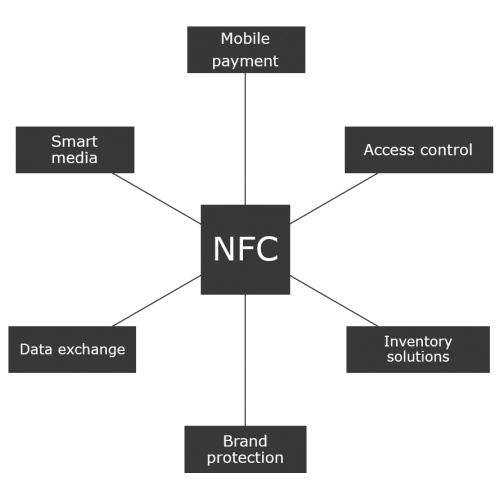 Similarly in healthcare, just by tapping the mobile to the patient’s NFC tag, you can get the required information and the history of the patient very quickly.

Moreover, these NFC tags can be used for personal usage. Like, just by tapping the NFC tag, we can change the setting of our smartphone.

So, just by tapping the NFC tag, we can turn ON the Bluetooth or Wi-Fi in our smartphone.

Or we can open a particular app or game on our smartphone.

So, there are many android apps available using which it is possible to write on these NFC tags.

The most popular among all is NFC Tools.

So, using this app, it is possible to write on these NFC tags.

And in fact, it also shows the number of bytes that are required to write a particular code or URL in the NFC tag.

And using another app called trigger, we can assign the different tasks which should be performed once this NFC tag is detected.

Like when you are in the car, then just by tapping the NFC tag, we can start the navigation on our phone.

And once we reach the office then just by tapping the tag on the desk, we can turn the silent profile on our phone.

So, these are some of the applications in which NFC can be used.

NFC Vs Bluetooth Vs RFID Vs QR Code:

Now, let’s compare this NFC with the different technologies like Bluetooth, RFID, and the QR code.

So, first, let’s compare this NFC with Bluetooth. So, this Bluetooth is also wireless communication technology, and using this we can share the information and file with the different devices.

And in fact, the data rate at which the information can be shared on Bluetooth is quite high compared to NFC.

But in the case of Bluetooth, the time that is required for pairing the devices is more compared to NFC.

In fact, in NFC two devices can be set up in less than 0.1 seconds. And that is why today in many devices NFC is used for pairing the different devices.

And once the pairing between the device is established, then for communication either Bluetooth or Wi-Fi is used.

So, now let’s compare NFC with the RFID. So, this NFCis derived from the RFID standards.

And in fact, the working principle of NFC is quite similar to the RFID. But these RFIDs work on different frequencies.

Starting from the low frequency up to the ultra-high frequencies. But NFC works on the particular frequency band, that is 13.56 MHz band.

So, that is the one difference between the NFC and RFID.

Now, in the case of RFID, the reader sends the request to the RFID tag and in response. RFID tag replies back to the Reader.

That means, two devices can communicate with each other alternatively. So, that is the difference between the NFC and RFIDs.

Now, let’s compare this NFC with a QR code. So, this QR Code technology can also be used in some applications where these NFC tags are used.

For example, using this QR Code, we can open some applications or we can provide some additional information to the customer about the product.

So, in a way, this QR Code can also be used in place of NFC tags. But to access the information, we need to scan this QR Code using mobiles.

While in the case of NFC, just by tapping the mobile to the NFC tag, the information can be easily accessed.

So, we can say that the access time which is required in the case of NFC is less than the QR Code.

Moreover, this NFC is more secure than the QR Code, because, in the case of a QR Code, it can be replaced by putting another QR Code on top of it.

While in the case of NFC, if someone puts another NFC tag on top of it, then neither of the tags can get accessed.

So, in a way, NFC technology is more secure than QR Code Technology.

So, this is all about the comparison of NFC with the different technologies like QR Code, Bluetooth, and RFID.

So, I hope in this article, you understand what NFC technology is, how this NFC works and what are the different applications in which this NFC can be used.

If you want to know more about this Near Field Communication Technology, then visit Wikipedia’s official page.

So, if you have any questions or suggestions, do let me know in the comment section below.