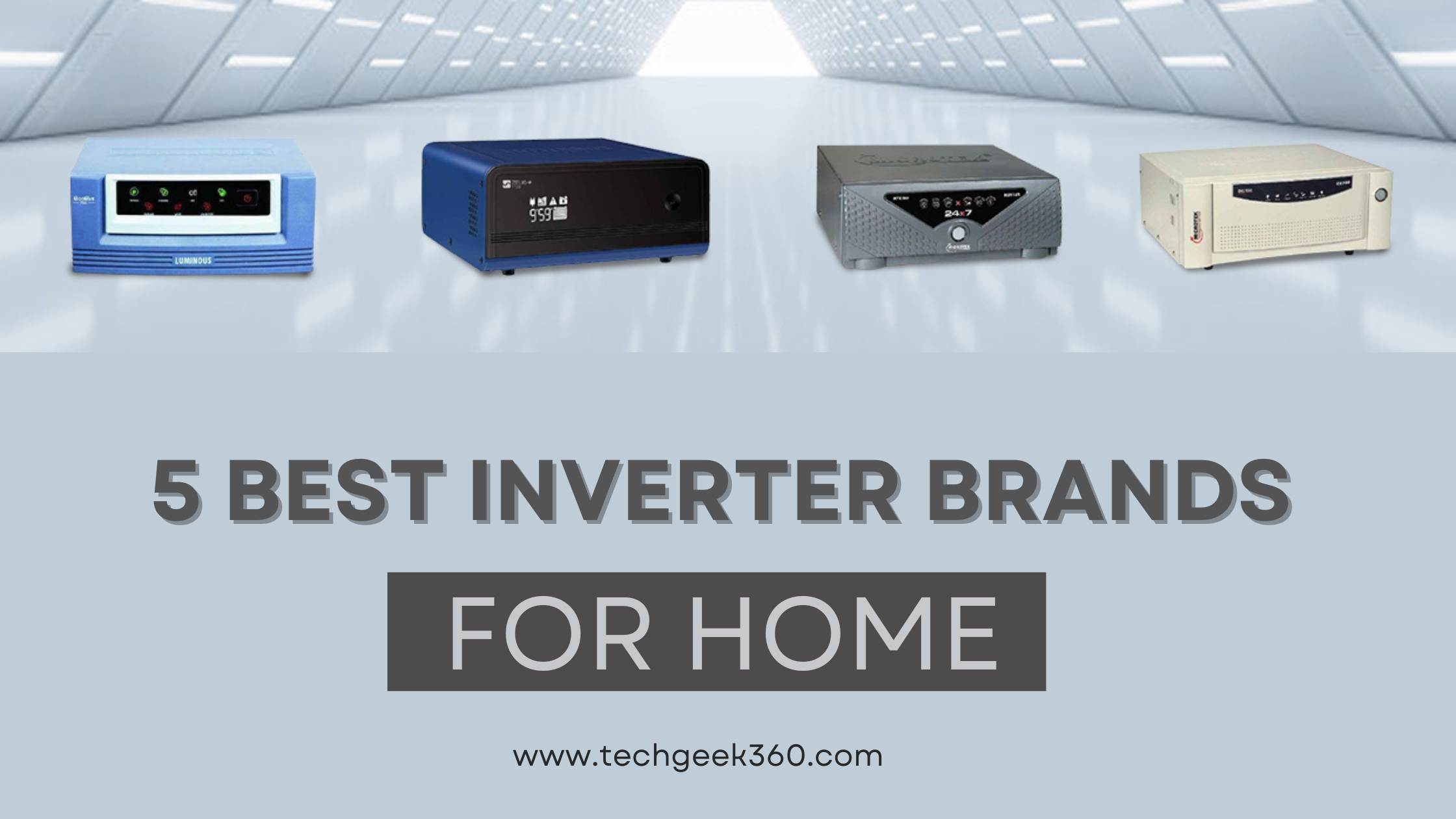 India is still a developing country and combined with its tropical hot and humid climate, the need for power backup to maintain cooling solutions becomes necessary. To go along with that, in this digital age, survival without electricity is really tough, while productivity remains impossible.

Here are the top 5 best home inverter brands in India to keep your power supply running!

As a company that came from Europe to sell batteries in India, Exide has swiftly made a very reputable and instantly recognizable name in India for its batteries. The industrialists at Exide promptly thought that they should enter an industry that has batteries as its essentials and so the range of home inverters by Exide was formed.

As a primary battery manufacturer, Exide struggles to market its inverters even though they have more features than other inverters competing in the same price range. Their inverters have good user reviews and the customer support is excellent due to the large and existing market Exide holds from its batteries.

If you’re a consumer looking for a home inverter with great features, high availability of compatible batteries, and an affordable price, Exide might just have a model that is best for you.

ZunSolar is a solar batteries and equipment manufacturing company based in India. They manufacture solar-based Sine wave inverters which have had excellent reviews from customers in India. ZunSolar makes solar batteries for its inverters as well which makes this combination perfect for environmentally and socially conscious consumers.

ZunSolar also makes solar panels that connect to their batteries. Consumers who use these inverters will save a lot of money on electricity and it will reduce their carbon footprint as well, which benefits both so it is a very sustainable solution.

ZunSolar 1050 VA Pure Sine Wave ZRi PWM Home Inverter when used in tandem with the ZunSolar’s solar panels, creates a very economical and efficient power backup solution and the solar batteries enable it to function even on a sunny day. The only drawback of these inverters would be the lack of an effective consumer base which makes repair and customer support scant and often very time-consuming. Solar is a step in the right direction but a lot of awareness and incentive is yet to be created for it to viably solve ecological problems.

V-Guard is one of the most recognizable names in Indian electronics manufacturing companies as they make a plethora of electrical products such as stabilizers, cables, pumps, and of course, inverters. The brand was founded in 1977 in Kochi and is currently headquartered there.

V-Guard manufactures a range of inverters that are both durable and feature-loaded. The latest in these ranges is a range of smart inverters which come with Bluetooth connectivity. V-Guard has a large network of service centers so customer support is very readily available.

V-Guard has made its inverters incredibly smart and efficient. They have features like turbo charge and holiday mode, the latter of which is to save electricity when the homeowner is not at their home. Their smart inverters can also be controlled via mobile through the V-Guard application.

Overall, the reputation this brand has speaks for itself. It is an electronic giant in India and builders have been promoting this brand thoroughly for years, so it can be purchased on the word of mouth alone, however, the technical specifications and reviews do justify the high praise this brand gets.

Unlike V-Guard, which has a diversified range of products under its name, Microtek has focused solely on the UPS/Inverter category. If you have grown up in an Indian household, you are sure to have heard of the famous jingles Microtek inverter ads had at the time, despite being a Taiwan-based brand.

Microtek has a really high customer approval rate due to the high quality of its products. The switch time between direct power and inverter backup is really low, along with a long usable lifespan and low maintenance requirements. They are also affordable and are available in a large range of VA (Volt Ampere) ratings, so they can fit a wide variety of households.

The company Microtek was established in 1980 in Taiwan and, globally, is a giant in digital imaging equipment having two scanner brands, ScanMaker and ArtixScan. In India, it primarily makes consumer electronics and has a large turnover each year from that.

Microtek inverters are sure to last long, their R&D is very thorough and they are very affordable as well. Their customer support is very strong and they can be reached at any time via call, mail, or actually visiting their location in Delhi.

Luminous Power Technologies is a subsidiary of Schneider Electric which is a French electronics brand. In India, Luminous manufactures inverters, fans, lights, and solar solutions as well. They are very highly reputed and have the no.1 spot in terms of user reviews. Their reputation was strengthened as they used Sachin Tendulkar, the most famous Indian cricketer to date in India, in their ad campaigns.

The Zelio and Zelio+ series from Luminous has raked in extremely positive reviews. They are a range of smart inverters designed to last a really long time and with their feature-rich modules, they are highly future-proof as well. They are completely noiseless with highly intelligent processors and adaptive operation.

Overall, Luminous takes the crown as it does equally good in all departments, packing all the essential features and conveniences that an inverter should have, and a crazy good customer support service.

These are all the brands you should look after if you’re in the market for a home inverter, with different specialties and an overall outperformer, it is sure to cater to your specific need. The 5 brands mentioned in the above list make up almost the entire inverter market in India, as they are so prominent. Along with that, their network with electric service providers is really well built. Happy Buying!

If you want to give any suggestions to Tech Geek, then comment down below.