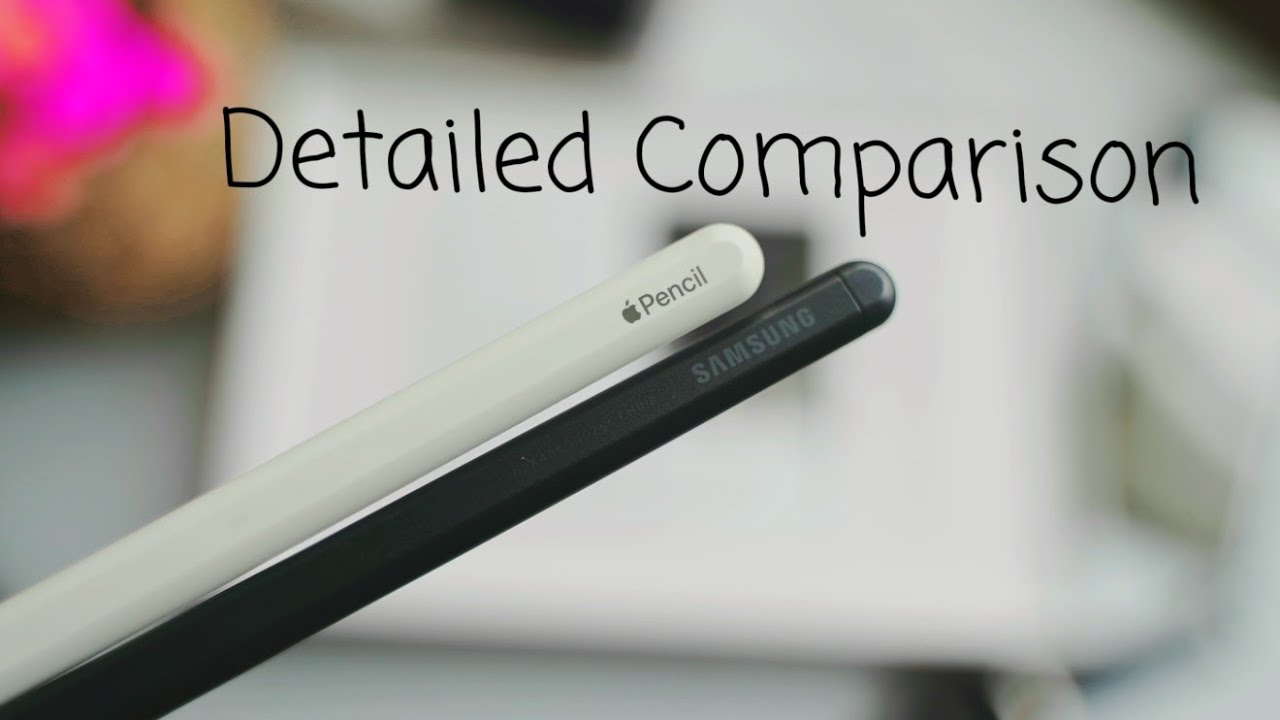 In this article, we’ll take a look at the Apple Pencil vs Samsung S Pen in detail.

Hello everyone and welcome! Tablets are so popular these days. So many people consider purchasing tablets other than just media consumption.

And they want to use tablets for work or education but have no idea which one is the best for the purpose.

And also we’ll talk about what’s different, pros and cons, and what you should consider before you purchase a digitizer pen supported tablet.

Which One Should I Buy?

First up, you need to know which tablet supports a digitizer pen.

First of all, Apple and Samsung use different digitizer pen technology so their pens are not compatible with each other.

And all of the tablets don’t support digitizer pens so you have to do some research.

And the product name using “with S Pen” supports S pen as well. On the other hand, all of the iPad Apple sells support Apple pencils at this point.

But you need to take a look carefully if you want to buy a discontinued or second-hand iPad due to the pen compatibility.

And iPad compatible digitizer pens such as Logitech Crayon or other pens made by unknown Chinese makers have different compatibility, so please keep that in mind.

Now let’s talk about how the digitizer pen works and what’s different between the Apple pencil and Samsung S pen.

You might think “why do I need to know how it works?”

The reason I explain this is that the characteristics are totally different because of this.

It does not require batteries in it so the S pen is relatively lightweight and less expensive.

But some S pens need to be charged but this is for the additional function called “Air action” so basically it doesn’t matter if the pen is not charged for inking.

For your reference, the EMR technology must have an additional panel behind the display screen. It is much thinner than before but it tends to be thicker than others.

On the other hand, an Apple pencil must have its own energy source to work for inking.

As a result, it has to have batteries in it so it is relatively heavy and more expensive.

And it does not require an additional panel like EMR so the capacitive touch panel is used for touch and pen input as well.

The iPad can treat touch and pen input as different but the pen input is kind of a very precise touch.

Next, let’s talk about palm rejection which is the function that ignores touch inputs when inking.

The EMR technology uses a simple way to achieve the palm rejection functionality. The touch input is ignored when the pen approaches the screen in a certain range.

The range when the tablet starts to recognize the pen is called “Hover Distance”.

If the hover distance is too short, it is a bit annoying to use the pen.

But how the Apple pencil’s palm rejection works are not officially known yet.

I assume that it works using hover distance, the area of the hand touches the display, which one touches first, pen or hand, and so on.

The next is how the pen input is processed. As I mentioned before, the tablet recognizes the S pen if it is in the range of the hover distance and ignores the touch inputs.

And the pen tip touches the display and pushes more than the IAF(Initial Activation Force) now the tablet registers it as pen input.

But an Apple pencil is much simpler than this. In this case, the Apple Pencil approaches the display close enough that the pen input starts even though the pen did not touch the display.

It makes the user feel the Apple Pencil has snappier pen input.

But the iPad recognizes the pen input continues when the pen does not touch the screen anymore but still close enough then noticeable “Fishhook” produces at the end of the pen stroke.

Now let’s talk about the pen accuracy at the end of the screen. The EMR pen must decide the focus of the pen tip using the coordinate information around the pen tip’s 360 degrees.

But the pen loses its accuracy at the end of the screen because there is not enough information to decide its focus.

But the Apple Pencil is working as a sort of accurate touch input so it does not lose its accuracy like the S pen edge of the screen.

Pen latency is the total time between a pen triggering pen input and the display showing the ink.

There is no latency between a pen and paper in the real world so a user feels awkward when the pen latency is longer.

Apple announced the Apple pencil’s latency had been reduced from 20ms to 9ms when Apple introduced the iPadOS in 2019.

Samsung S pen was late to the party in terms of pen latency. Samsung reduced it from 59ms to 9ms on Galaxy Note 20 and Tab S7 series; they are now identical on spec sheets.

Next, let’s take a look at the pen tips. The pen tip is the only part of a pen to touch the screen so it makes huge effects on how you feel when using the pen on the tablet.

The S Pen has a soft rubbery pen tip and you can change it to different kinds of tips such as hard plastic.

And the pens compatible with S pens have different material pen tips, rubber, plastic, or felt for example and you can find them relatively easily.

On the other hand, the Apple pencil’s pen tip has a plastic shell with a metal core in it. The sound when you use the pen is quite loud and the pen tip is slippery.

And the price of the replacement pen tip is more expensive as well.

Alright, let’s wrap things up here with the summary. What are the pros and cons of the Apple pencil and Samsung S Pen?

First, the S Pen does not need batteries to work basic inking functions; you don’t have to charge the pen, lightweight, and relatively less expensive.

There are different kinds of pen tips so you can change them if you want to and pen tips are easy to find and not expensive.

Most of all, it makes less noise when you’re using it so it is suitable for students like in a quiet library environment.

But it uses a quite simple way to achieve palm rejection function. You might think the palm rejection is not working well before you are getting used to the “pen first, touch next” habit.

And the S pen loses its accuracy at the end of the screen. That’s another con of the S pen. On the other hand, the Apple Pencil is very responsive and the palm rejection function works very nicely.

And it does not have an accuracy problem at the end of the screen. But you have to charge the pen regularly and it is a bit heavy side, more expensive as well.

One of its big cons is its pen tip. It is loud when using the pen, no choice other than plastic, and expensive.

And you might feel the Fishhook at the end of the stroke is quite annoying. Samsung is late to the party but improved the S pen’s latency from 56ms to 9ms which is identical to the Apple pencil.

Let’s wrap things up here with a buyer’s guide whether an Apple pencil or Samsung S pen.

But it is very subjective because everybody feels a different way.

It is not just hardware but software like the operating system platform, apps ecosystem, etc.

That being said, it really depends on your own taste and preference. But here is some advice for you who want to buy a digitizer pen supported tablet: First of all, you need to think again “Do I really need a digitizer pen?”.

If you are thinking “it’s good to have” or “I am gonna use it if I have it” well, it is very likely to lose your attention quite quickly and don’t use it anymore.

Especially Apple pencils are more expensive and there is more chance you spend more money on their accessory.

Second, you really need to consider which platform is the best for you. So I suggest you decide which pen is for you “I purchased an iPad” “because of its app ecosystem” “then leads me to buy the Apple pencil as well.”

or, “I purchased a Galaxy tab because I am using an Android phone” rather than just “I want Apple pencil” or “I like S pen” like so.

And you have to research the app you need to use is available on the platform and it is freeware or you should purchase or so.

Last but not least, you need to consider pen technology. The feeling when writing on the screen is extremely subjective so you have to test drive before buying it.

I highly recommend writing a full lyric of your favorite song rather than just jotting some words.

Along with writing the lyric try to find out how it feels in your hand, how hefty it is, how loud the pen tip’s noise, how the palm rejection works well with your pen writing habit, and the pen accuracy is acceptable near the edge of the screen.

Also, find out how the pen tip is slippery and it is OK with you, and how they are similar between your virtual writing and your actual paper writing.

If you have any doubts or queries regarding this topic, then comment down below.

And if you want to give any suggestions to the Tech Geek, then comment down below.